The high risk work licence (HRWL), implemented in the Northern Territory (NT) on 30 June 2010, was introduced to align with national safety standards, improve interstate recognition of skills, and better protect against fraud by incorporating a photograph of the licence holder.

HRWL are issued for a period of up to five years and are valid in every Australian State and Territory enabling people to operate high risk equipment under consistent standards Australia wide.

When a licence is issued with more than one licence class, the expiry date of the licence is determined from the date when the first class or classes were granted.

National certificates of competency cards or ‘old style’ certificates or licences issued before 30 June 2010 did not originally have an expiry date or a photograph of the licence holder. These certificates are now expired as per the transitional arrangements identified below. If you wish to re obtain a HRWL in the NT you will be required to undergo a new assessment of your competency with a registered NT assessor. For a list of registered assessors go to find a high risk work licence assessor. 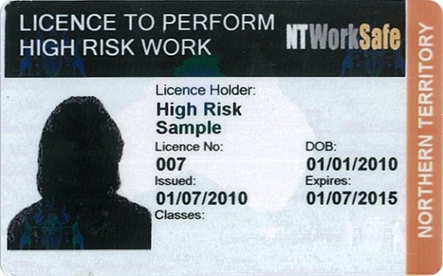 What licence classes are not high risk work licences?

The following classes may be issued by some States or Territories, but they are not issued in the Northern Territory.

Interstate HRWL are recognised in the NT. As such, they do not need to be transferred.

If you are a resident of the NT and your HRWL is due for renewal, you are able to renew your licence at the Territory Business Centre.

If you now reside in another State/Territory and your HRWL is due for renewal, you are required to renew your licence in that jurisdiction.

If you hold a certificate of competency for a licence class that is not a HRWL that was issued interstate, contact the relevant issuing body for more information.

A person must undergo the appropriate training through an RTO in order to obtain this licence. You are no longer able to perform this work under the supervision of a person who holds a relevant licence unless via a structured training plan formulated by the RTO.

Applying for a licence

To be eligible to apply for a licence you must:

You can get information on how to apply for a licence by:

Document type:
Information bulletin
Topics:
High risk
Last updated:
13 October 2022
Print this page
Email this link
Is there anything wrong with this page?