The purpose of this Safety Alert is to remind persons conducting businesses and undertakings (PCBUs) that mobile cranes are designed to be used on firm and flat ground, when travelling with suspended loads (pick and carry).

At a recent bridge construction project in NSW, a ‘pick and carry’ mobile crane moved across a slope whilst travelling with a suspended load. This reduced the crane’s lifting capacity and caused it to tip on its side. 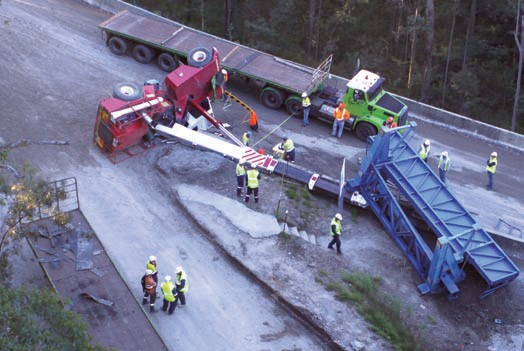 Preliminary findings indicate that the crane operators and engineer’s assessments of the lift and the travel path did not consider the dangers of carrying a load on a slope.

Document type:
Safety alert
Topics:
Construction, Plant and machinery, Transport and storage
Issued:
05 February 2013
Last updated:
13 October 2022
Print this page
Email this link
Is there anything wrong with this page?